Home » TYPES » Trees » Cryptocarya latifolia leaves
Back to Category Overview
Total images in all categories: 11,549
Total number of hits on all images: 6,635,008 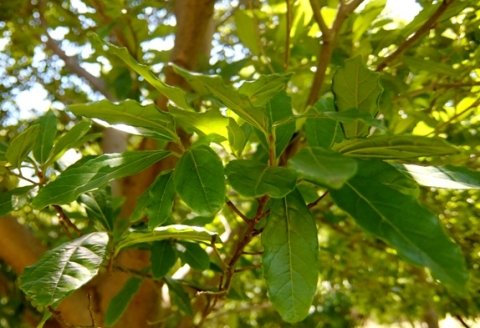 The leaves of Cryptocarya latifolia are simple in structure and alternate in position on the branches, growing on short petioles (stalks).

The leaf-shape is broadly ovate, reflected in the specific name, latifolia. The Latin word, latus, means broad, while folium denotes leaf. The leaf apex is rounded, notched or tapering, the base tapers. Leaf dimensions are 5 cm to 10 cm by 2 cm to 4 cm.

The leaf texture is leathery and initially hairy, the hairs later remaining only along the veins. Leaf colour is dark green to bright green and variably glossy, the lower surface paler or cinnamon brown (from the hairs) and old leaves dull blue-green.

Three veins spread from the leaf base, the central, bigger one or midrib has several lateral veins emerging from it, curving in as they ascend to the margins. The curving is initially gradual, near the margin strongly, missing it and joining the next vein. The lateral veins alternate from the midrib, not growing in pairs. Venation is prominent on the lower leaf surface.