Home » TYPES » Trees » Cryptocarya latifolia
Back to Category Overview
Total images in all categories: 11,549
Total number of hits on all images: 6,634,960 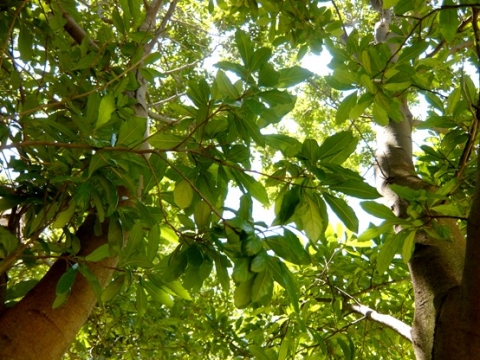 Cryptocarya latifolia, commonly known as the broad-leaved quince (among many other names), is a large tree becoming up to 20 m tall with a spreading crown (SA Tree List No. 113).

The spring flowers are small, about 1,2 cm in diameter with slender, white petals. They grow in long, branched sprays, covered in coppery hairs and described as spidery.

The spherical fruit is about 2 cm in diameter and green on the tree, becoming black after it has fallen. The fruits are eaten by birds and game. Drift fruits are sometimes found washed up on KwaZulu-Natal beaches transported down the rivers.

The species distribution lies in a coastal strip in KwaZulu-Natal from Port St Johns to Maputaland.

The habitat is evergreen forests, along streambanks and on coastal plateaus. The species numbers in habitat are declining early in the twenty first century, but it is not considered threatened yet.

The tree is fast-growing and somewhat frost-resistant, a prospect for parks and large gardens (Coates Palgrave, 2002; Pooley, 1993; www.redlist.sanbi.org).