Home » TYPES » Trees » Cryptocarya latifolia trunk
Back to Category Overview
Total images in all categories: 11,401
Total number of hits on all images: 6,175,078 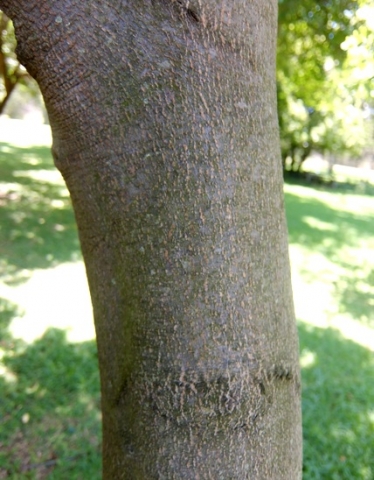 The stem of Cryptocarya latifolia is erect and may become up to 1 m in diameter. On mature stems the bark is grey-brown to pale brown and fairly smooth. In the picture the bark is still grey-green and smooth, apart from lenticels. Some fine vertical fissuring develops, as well as some horizontal ridges. Coppicing is often seen.

The wood of C. latifolia is white and soft. The bark is used in traditional medicine, mixed with crocodile fat to produce an ointment for treating chest complaints. It is presumably easier to obtain bark than crocodile fat; hopefully the bark is collected only once the crocodile has yielded its fat and the patient still needs medicine.

The bark of this tree is also used in performing some rites related to magic, presumably not involving crocodiles (Coates Palgrave, 2002; Pooley; 1993).