Home » TYPES » Trees » Cryptocarya latifolia, the broad-leaved quince
Back to Category Overview
Total images in all categories: 11,528
Total number of hits on all images: 6,614,416 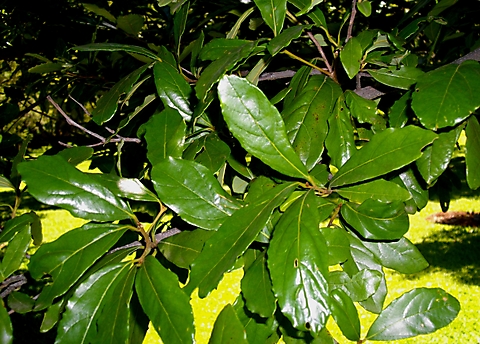 The Cryptocarya latifolia leaves seen here display their glossy and leathery upper surfaces. The velvety aspect of the blades sometimes seen is not in evidence in the photo, the leaves too old for that.

The widest leaf part is closer to the tip than the base in some cases, rendering the leaf-shape obovate rather than ovate, the usual description of these leaves.

The margins are untoothed in many parts, although not appearing smoothly entire in picture, due to being wavy, sinuate, rolled under, damaged or otherwise uneven.

The midribs are creamy yellow, in many cases to their tips or near them, while lateral veins appear sunken, but not substantial enough to show colour at arm’s length.

The short petioles are abruptly broader than the lower midribs, sometimes angled independently rather than in smooth continuation. Petioles and smaller branchlets are olive green-brown and faintly hairy.