Home » TYPES » Trees » Croton gratissimus sapling near Hekpoort, Gauteng
Back to Category Overview
Total images in all categories: 11,401
Total number of hits on all images: 6,175,264 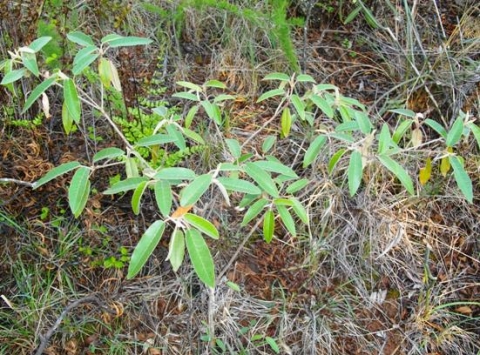 Croton gratissimus has alternate, elliptic to lanceolate leaves with shiny green upper surfaces and silvery lower ones. The silvery surface is caused by hairy scales growing on the leaves; some of the scales are reddish. Among these scales small brownish dots can be seen. These are also scales, but glandular ones. The paired lateral leaf veins, up to 17 in number, are just visible. The leaf apex tapers, the base is lobed to rounded. The margins are entire, sometimes wavy; the leaf size is variable. There are two glands at the leaf base on either side of the midrib.

The lavender of the name comes from the fragrance given off when the leaves are crushed. A typical feature of this tree is the few yellow, orange or red leaves found on the trees throughout the summer season.

The flowers are small and cream to yellow. They grow in spikes with several male flowers near the tip of the spike and a couple of female ones at the base. The flower buds form early and then take a long time to open (Coates Palgrave, 2002; Schmidt, et al, 2002).