Home » TYPES » Trees » Croton gratissimus at the Hartebeespoort Dam
Back to Category Overview
Total images in all categories: 11,921
Total number of hits on all images: 7,168,639 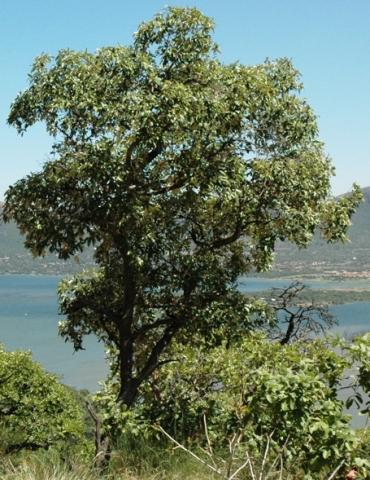 Croton gratissimus, the lavender croton and laventelkoorsbessie in Afrikaans, is a small to medium-sized, winter deciduous tree, typically reaching 5 m (SA Tree List No. 328). On the Witwatersrand, the colder extreme of the tree's distribution range, they become barely 2 m tall. It may, however, occasionally reach 10 m in height.

The tree grows widespread in the northern parts of South Africa, but the distribution lies predominantly beyond the northern border of the country, in central Africa where this tree may reach heights of 20 m.

The habitat is open bushveld and on rocky outcrops. The tree is not considered to be threatened in its habitat early in the twenty first century (Coates Palgrave, 2002; www.plantzafrica.com; http://redlist.sanbi.org).