Home » TYPES » Trees » Crotalaria capensis
Back to Category Overview
Total images in all categories: 11,901
Total number of hits on all images: 7,141,774 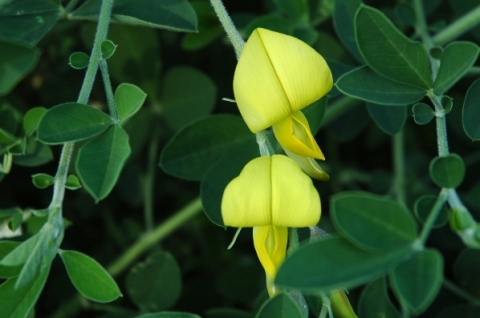 Crotalaria capensis, the eared rattle-pod, is a shrub, sometimes growing into a small tree, reaching heights around 3 m (SA Tree No. 225.12).

The trifoliolate leaflets are obovate or elliptic, green above, blue-green below and thinly textured. Leaflets may be hairy and sometimes taper to a tiny bristle-tip.

The pea-shaped flowers are yellow, sometimes marked with red. The keel petal is distinctly beaked. Flowering occurs in spring and summer. The pods are cylindrical and inflated

The species is distributed along the south and east coasts of South Africa, in the Western Cape, the Eastern Cape and KwaZulu-Natal, as well as inland in the Mpumalanga and Limpopo Lowveld; also beyond the border in tropical East Africa.

The habitat is wide-ranging in grassland, fynbos and thicket but mostly evergreen forests. The species is not considered to be threatened in its habitat early in the twenty first century (Coates Palgrave, 2002; http://redlist.sanbi.org).