Home » TYPES » Trees » Commiphora marlothii
Back to Category Overview
Total images in all categories: 11,401
Total number of hits on all images: 6,175,201 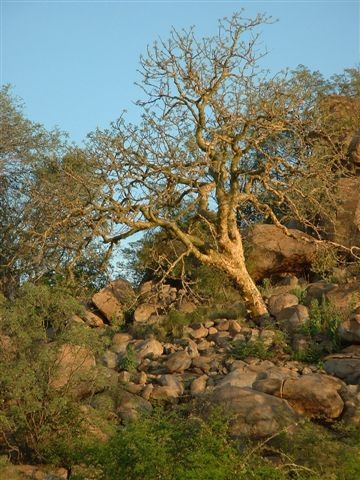 Commiphora marlothii is a small to medium-sized tree reaching heights of 5 m, occasionally 13 m (SA Tree No. 278). It often has a stout trunk, becoming a striking tree. The rugged granite rock terrain of its habitat helps, as do the sprawling branch postures and unusual shapes. There are also the sheets of loosely, dangling light-coloured bark adding visual impact.

The tree exudes a yellowish, aromatic, milky latex when bruised. The wood is too soft for anything like carpentry.

The species distribution in South Africa is Limpopo, Mpumalanga and Gauteng. It is more widespread in tropical Africa. The habitat is rocky hills and woodland. The species is not considered to be threatened in its habitat early in the twenty first century.

The flakes of papery bark are sometimes used to write on, which is possible, but not necessarily very sensible, unless there an absolute shortage is experienced. This feature brought about the Afrikaans common name of papierbaskanniedood (paper bark cannot die).

The roots are said to be edible and sweet tasting. The practice is probably not widespread (Schmidt, et al, 2002; http://redlist.sanbi.org).