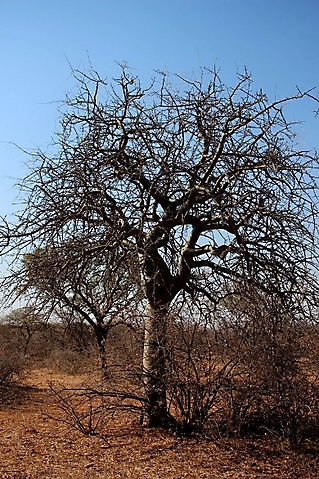 Commiphora, commonly known as corkwood and in Afrikaans as kanniedood (cannot die), is a genus of trees and many-stemmed shrubs in the Burseraceae or myrrh and frankincense family. This family comprises 18 genera and 540 species in Africa, Asia and America. The only South African genus of this family is Commiphora.

There are nearly 200 Commiphora species, mostly in Africa, some in India and Arabia. Southern Africa is home to 31 of them, where they are mostly found as deciduous trees in hot and dry regions to the north. These trees are often leafless for many months in winter. The flowers appear in spring before the leaves.

The smooth or papery bark that often peels or flakes has ducts that secrete pungent resins. The wood is light, of little value. The branchlets are often spine-tipped.

The alternate to spiralling leaves are simple, trifoliolate or imparipinnate. They are often densely grouped near branch tips or on spur-branchlets, aromatic when crushed.

The small, insignificant flowers are mostly unisexual, often dioecious. They grow in panicle-shaped cymes or clusters. The calyx is funnel-shaped to bell-shaped with four lobes. The four straight petals spread, yellow to green in colour and free or slightly fused at the base.

There are usually eight stamens in two whorls in a male or bisexual flower, reduced to staminodes in the female flower. The mostly two-chambered ovary is superior to half-inferior, a vestige in male flowers.

The fruit is an ovoid to nearly globose drupe. Its skin and fleshy parts split open when ripe, showing the black seed attached at its base to a red or yellow pseudo-aril.

Myrrh, a fragrant gum resin, has been extracted from Commiphora myrrha since ancient times for human use in Arabia and North Africa. It is used in perfume, incense, and medicine (as an analgesic). In olden times it was added to wine and in ancient Egypt used in embalming. Balm of Gilead is obtained from C. gileadensis.