Home » TYPES » Trees » Commiphora capensis
Back to Category Overview
Total images in all categories: 11,523
Total number of hits on all images: 6,605,184 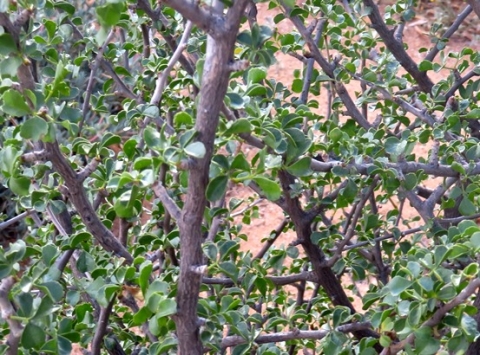 Commiphora capensis, commonly known as Namaqua corkwood or in Afrikaans as Namakwa kanniedood (Namaqua cannot dead), is a short, stubby or thick-stemmed shrub, occasionally a small tree. It may reach from 50 cm to 3 m in height (SA Tree List No. 273).

The small, unisexual flowers are yellow or greenish and inconspicuous. They grow solitary or in small sprays of 1 cm long from leaf axils, appearing from spring to early autumn with (and after) the leaves.

The fruit is an ovoid to globose and laterally flattened drupe, up to 1,5 cm in diameter. It is greenish brown and shiny, its tip pointed. The species is distinguished from C. dinteri by the absence of a pseudaril from the fruit of the former. A pseudaril is a brightly coloured, fleshy external growth occurring on the fruit of some Commiphora and Bursera species. The fruit of C. capensis are eaten by birds.

The species is range-restricted, occurring only in a small part of the Richtersveld in the lower Gariep River valley and in southwestern Namibia.

This semi-desert shrub is endemic to the arid winter rainfall region where it grows on rocky slopes and outcrops. The species is not considered to be threatened in its habitat early in the twenty first century (Mannheimer and Curtis, (Eds.), 2009; Williamson, 2010; Coates Palgrave, 2002; iNaturalist; http://redlist.sanbi.org).