Home » TYPES » Trees » Commiphora capensis bark
Back to Category Overview
Total images in all categories: 11,401
Total number of hits on all images: 6,175,073 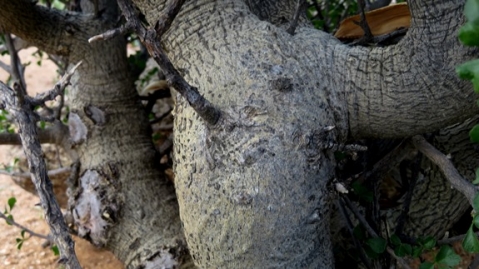 The fat basal stem of Commiphora capensis, the Namaqua corkwood, may branch near the base, much of the plant’s bulk concentrated in the short, very thick lower stem part. Stems often deviate from erect, growing angled or sideways.

There is a rapid to abrupt decrease in stem girth not far from the base, one to a few short, bare stems possessing a big proportion of the woody mass, while smaller upper branches have a scattering of small spur-branches, sometimes resembling spines but not spine-tipped.

The stout dwarf branchlets are hairless apart for some glandular hairs at their apical growth points. When touched, the young shoots exude an aromatic resin.

The bark on the trunk and main stems is whitish grey to dark grey sometimes with some yellowish brown or green on the fairly smooth surfaces. There may be flaking in small, whitish translucent, papery pieces or scattered dark patches (Mannheimer and Curtis, (Eds.), 2009; Williamson, 2010; Coates Palgrave, 2002; iNaturalist).