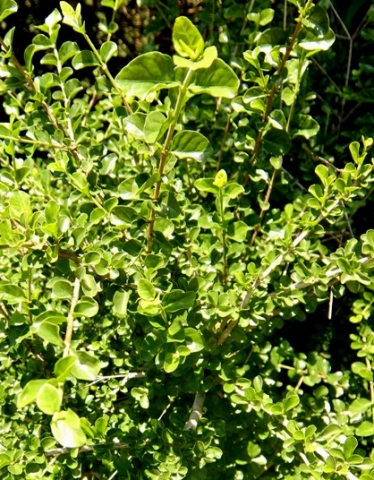 Coddia rudis, commonly the small bone-apple, is a multi-stemmed shrub or small tree with arching branches, reaching heights from 1 m to 4 m (SA Tree List No. 689.1). The bark is pale grey to brown.

The flowers grow in axillary groups of up to three, starting off white and fading to a creamy yellow colour. They are funnel-shaped, the five corolla lobes spreading and bending back near their tips. Flower diameter is 1 cm to 1,5 cm. The stamens are attached to the base of the corolla and are not exserted, while the style is exserted far. Blooming happens from mid-spring to early autumn, the first ones appearing with the new leaves in spring.

The hard, spherical to ovoid fruit, eaten by birds, animals and people, is greenish-brown, slightly over 5 mm in diameter. The remains of the persistent calyx are visible upon its tip.

The species distribution is along the east coast of South Africa in the Eastern Province and KwaZulu-Natal, as well as in the Mpumalanga and Limpopo Lowveld. Beyond the border the plant is found at least in Zimbabwe, Swaziland and Mozambique.

The habitat is hot, high rainfall open woodland, mixed scrub and forest margins. The species is not considered to be threatened in its habitat early in the twenty first century (Coates Palgrave, 2002; Van Wyk and Van Wyk; www.redlist.sanbi.org).