Home » TYPES » Trees » Volkameria glabra
Back to Category Overview
Total images in all categories: 11,905
Total number of hits on all images: 7,155,895 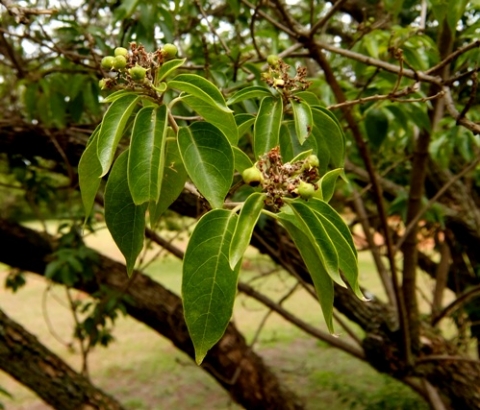 The name change from Clerodendrum happened in 2010 after molecular analysis of the DNA of several related species, resulting in the reinstatement of the Volkameria name for the genus, an old name first used by Linnaeus in 1753.

The species distribution is along the east coast of South Africa from the Eastern Cape and KwaZulu-Natal to all the provinces north of the Vaal and into tropical Africa.

The tree grows within reach of the salty spray of the sea and generally in coastal evergreen thicket, as well as inland to the Drakensberg foothills. The species is not considered to be threatened in its habitat early in the twenty first century.

V. glabra played a big role in human life where it grew in the days when people lived close to nature. Ancient lore, a pervasive product of the human mind, spills over the borders of all sciences like botany and history, serving as their forerunners, less rigorous and free in its reach.

This tree may (still) serve in repelling insects, polecats and hyenas. The pungent, foul smell of the leaves when crushed is well remembered in the Afrikaans name of stinkboom (stinking tree).

Of mysterious significance to some, V. glabra has a reputation of being used by witches. Many medicines have been concocted from parts of this tree in the past, those patients treated very long ago, of course all dead from other causes. This casts no aspersions on the tree’s reputation, people being so short-lived compared to some citizens of tree world.

Some part(s) of the tree have also served to kill… intestinal worms in children and calves. Kraals in shallow seawater to capture fish at low tide have been made (or are still sometimes made), using sticks of this tree. Field craft comes and goes in cultures and regions over time, people sometimes dying in circumstances where others, including their grandfathers or grandchildren would succeed.

Good for lighting fires, the tinderwood name is warranted, in Afrikaans tontelboom. Always good to know more plants when living in the bush. The tree is also said to serve in treating snakebite, but one needs to know what part to use and how, other than beating the snake (or the victim) with a V. glabra stick. The branches are also used in building huts.

A useful tree in many respects, it may for instance help to know that rubbing the crushed leaves of V. glabra on one's face and arms to repel bees when collecting honey from a hive.

A tale spread by old wives? Evaluating hearsay and ancient practices can become tedious. One can respect old wives without taking undue risk when the consequences may be serious (Coates Palgrave, 2002; Pooley, 1993; Wikipedia; www.plantzafrica.com; http://redlist.sanbi.org).