Home » TYPES » Trees » Clausena anisata
Back to Category Overview
Total images in all categories: 12,087
Total number of hits on all images: 7,392,982 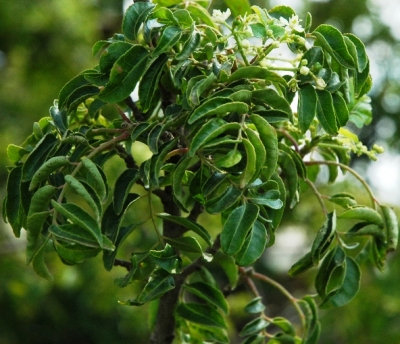 Clausena anisata, commonly known as horsewood and in Afrikaans as perdepis (horse urine), is a shrub or small tree usually reaching heights around 4 m, occasionally 10 m (SA Tree List No. 265). The bark is grey-brown and mottled but fairly smooth.

The leaves are alternate to spiral up the stems, often crowded near stem-tips. The leaf structure is imparipinnate, comprising four to eight pairs of opposite to sub-opposite leaflets, as well as a terminal leaflet. The petiole is from 10 mm to 25 mm long, while leaflet petiolules are short.

The leaflet shape is ovate to narrowly elliptic with asymmetric base, the apex tapering and notched. The margins are toothed or scalloped. The blades are initially purplish brown, maturing to dark green to bright green and covered in translucent gland dots. Venation is prominent on the lower surface. Leaflet dimensions are variable, from 10 mm to 60 mm long and from 6 m to 25 mm wide, the smallest ones at the base.

The leaf scent is usually unpleasant, sometimes likened to aniseed and stronger when crushed. The tree's specific name, anisata, refers to the aniseed resemblance.

The species distribution is along the coast from the southern Cape through the Eastern Cape and KwaZulu-Natal, also inland in Mpumalanga and Limpopo, as well as in the east African tropics.

The habitat is evergreen forests, fringing forests, low altitude woodland and streambanks, from sea level to elevations around 2200 m. The species is not considered to be threatened in its habitat early in the twenty first century (Venter 2012; Coates Palgrave, 2002; Schmidt, et al, 2002; http://redlist.sanbi.org).