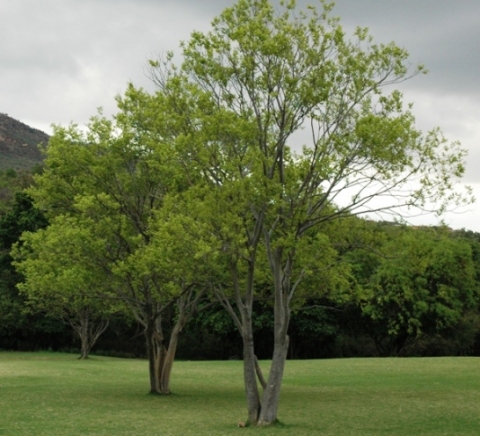 Celtis africana, the white stinkwood, typically becomes a spreading tree of about 12 m in height (SA Tree List No. 39). In thriving forest conditions it may reach 30 m.

C. africana assumes different shapes and sizes across this expanse as conditions dictate, adapting to the resources on offer in each of the diverse habitats the tree has mastered. A typical habitat for good growth of this tree would be forest, thicket or grassland where at least moderate rainfall is received.

The same tree is established in even more guises in the great habitat diversity extending across Africa to Ethiopia and the Arabian Peninsula. The species is not considered to be threatened in its habitat early in the twenty first century.

C. africana is commonly grown in gardens, city parks and along streets. It clearly deserves this favoured status for its looks, ease of propagation and fast growth (Coates Palgrave, 2002; Schmidt, et al, 2002; http://redlist.sanbi.org).