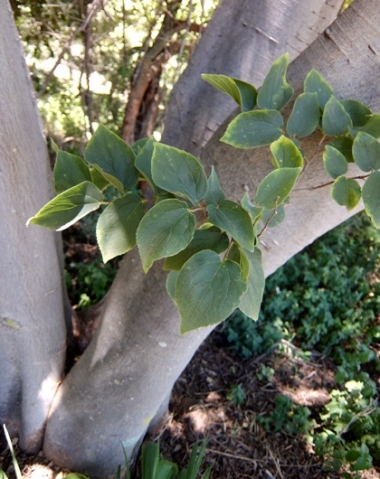 Celtis africana leaves may show yellow discolouring, initially in zones along the margins, progressively all over as autumn sets in. The fruits of this tree are popular with several bird species; good for bird-loving gardeners, good for seed dispersal. Some moths and butterflies also interact with the tree in their reproductive cycles.

The indigenous C. africana is often confused with some introduced exotic members of the Celtis genus, notably C. australis and C. sinensis. C. australis has glossy green, hairless leaves. C. sinensis has coarse-haired leaves and stronger tapering to its leaf-tips, the marginal teeth larger. The confusion is aggravated since these exotic species tend to hybridise with C. africana, particularly in Gauteng.

Local born children of foreign residents are usually accepted as local citizens. Any xenophobia related laws aimed for or against unwelcome immigrants are only significant if enforced, while populist reactions based in little logic become continually more real, based on bread and butter issues of the moment and the emotion.

Many plants, also the foreign Celtis trees and their offspring of mixed origin are here to stay, accepted as such. After a time every invasion is spilt milk, little to be done about it within reasonable cost levels. For now these exotic Celtis trees are only recognised as exotic by an interested minority. The majority recognis a tree when they see one, any tree understood only as a tree, not its pedigree... it's a tree or shade, or wood, or charcoal, or money.

Botanical facts function in marginal, little noticed terrain, unless the limelight arrives following some dramatic incident, capitalised upon by the media. Nature and its details are remembered by minorities, as long as there are books, education and people concerned with such matters, which is not guaranteed in every community.

How many exotic species are marring natural biodiversity in your neighbourhood without anybody taking notice or even knowing? Who knows what havoc may be caused locally by one or more invaders or has already done so? Early intervention may solve such problems, the window of opportunity closing after an invader has achieved critical mass.

Such matters were of (too) little concern at some time in the past in each exotic plant's case. Fewer people, less science and limited early impact suggested no harm done, but no longer.

Who knows what the values of society and the strength of their drivers will be concerning the botanical heritage in the future? Humanity seems to grow a universal, egocentric outlook amidst periodic (idle?) chatter about concerns over conservation. Meanwhile, natural heritage is lost imperceptibly, slipping away continually. And once lost always hard, often impossible to recover.

How significant and sincerely regarded are natural heritage and biodiversity custodian roles in the current generation? And what are their future? The protagonists of any cause may be labelled in derogatory terms by its antagonists. This happens increasingly in a populism driven world. The media feeds dogs barking at everything. The discerning citizen has to make sense of it all in terms of values and learn to focus on what is important.

Involvement of school children and the public to discover and enjoy nature, retain this as a key value, will only make a difference if the consequences of current practices impacting upon nature are clear. Crying wolf becomes an irritating cacophony in the ears of the apathetic majority. There are fanatics beating drums, opposed by those for whom the world is too big a problem for poor little me needing my creature comforts and to hell with the rest. To some all causes and campaigns are too much trouble or branded fanatical. The bigger the human population and the noisier its mass media, the harder for the Homo to remain sapient.

A continual string of intermittent, small changes, concessions adaptations made by people, deliberately or without noticing, affect future outcomes for people and for earth. Unattended these imperceptible changes may be random or negative. To achieve desired outcomes, the well directed small steps are planned skirmishes in a battle for a decent world to live in. Current and future generations will lose a great deal in the long run unless the sapience feature of the species is continually applied to the optimise the issues of the day. When slipping back, tipping points can be passed without anybody noticing while clinging to comfort zones, the boiled frog phenomenon.

Will there be enough alert minds, enough curiosity stirred and enough deductive capacity applied to the issues relating to biodiversity and climate change for reach critical mass? Gazing at the current state of your local share of nature near home, your representative bit of the earth's magnificent heritage, may set the mind into appreciating the trend in your neck of the woods.

Movers and shakers are all born when realising the import of their particular issue, experiencing it close to the bone. Because they have sufficient energy, they cause movement in enough bones. It starts with joining relevant debates in the promising circles within reach, crystallising the thought into a plan. Initial results may be small as the spirit takes them on courses of action, the force collecting impetus from mustering support and harnessing resources, adjusting and adapting with fortitude.

Many breakthrough stories proceeded like this. The spark is always small and ordinary, its escalation always a miracle, for so many sparks die within seconds due to lack of something. Thinking is the essential human weapon, not the sword or the bomb. Manmade or womanmade achievement always starts with the spark of an idea, escalated by work to multiply it into harnessing support in human numbers and institutions.

The singular thought, adopted by the few can be honed, refined, adhered to even doggedly until spread to the many. Initially driven in fluid groups growing loyalty gradually, it is stepwise firmed up in structures and institutions. If the vision unfolds properly into strategy by competent and trusted leadership and the goal is worthy to support the momentum, the human endeavour brings breakthrough or turning points in history, in the future as in the past.

Every era brings new challenges, none appearing bigger than the current ones of overpopulation, overusing of resources and the destruction of nature. The skills required almost always have to be new or redesigned to keep the human society moving forward.

As long as people bank on their evolutionary derived gift of thinking and working towards bigger goals in bigger groups, the show goes on. Determination and hope will always be needed, unifying effort rather than fragmenting it. The species has always had the propensity for derailment in this department.

The thought sparks, new ones and half-new ones, are flying around the globe and will continue flying. Successes are interspersed with home-made disasters; it has always been so. The scope and size of the challenges seem to increase by the nature of the issues of the day: arresting the negative effects of climate change, feeding and educating humanity, finding solutions for water shortage, pollution, clean energy, population escalation, dealing with the unforeseen evolution in micro-organisms, the management of living space, finding decent leaders, the transfer of labour to bots... and other things not yet encountered that will frighten the grandparents (Coates Palgrave, 2002; Van Wyk and Van Wyk, 1997).