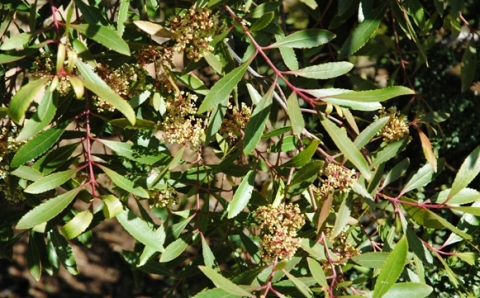 Catha edulis, commonly known as bushman’s tea, Arabian tea or khat, is an erect shrub or tree with drooping branches reaching heights from 2 m to 15 m (SA Tree List No. 404).

It has narrowly oblong to elliptic leaves positioned either opposite on older branches or spirally arranged on young twigs. The pendulous leaves on petioles of 1 cm shimmer and shake in the wind. They are leathery, glossy above and pale below. Ascending lateral veins ascend close to each other and angled close to the midrib, curving in before the margins. The leaf margins are toothed, each tooth being gland-tipped.

The flowers grow in great profusion in axillary clusters, mainly in spring. They are very small and white or pale yellow with green in the corolla throat. The fruit is a dehiscent three-valved capsule. The seed has a tiny narrow wing and a black aril.

The species distribution ranges from KwaZulu-Natal to Mpumalanga and Limpopo with a separate population in the Eastern Cape. The African distribution is large along the east of the continent to beyond Ethiopia.

The habitat is varied, common on lower, rocky slopes, riverine and evergreen forest, sometimes a forest pioneer. The species is not considered to be threatened in its habitat early in the twenty first century.

Khat derived drug use dates back to ancient times in the Middle East. About ten million people use the drug obtained from this tree on a daily basis. There is much variation among the laws relating to this plant and its uses in different countries (Schmidt, et al, 2002; Van Wyk and Van Wyk, 1997; Wikipedia; http://redlist.sanbi.org).