Home » TYPES » Trees » Cassia abbreviata
Back to Category Overview
Total images in all categories: 12,081
Total number of hits on all images: 7,379,206 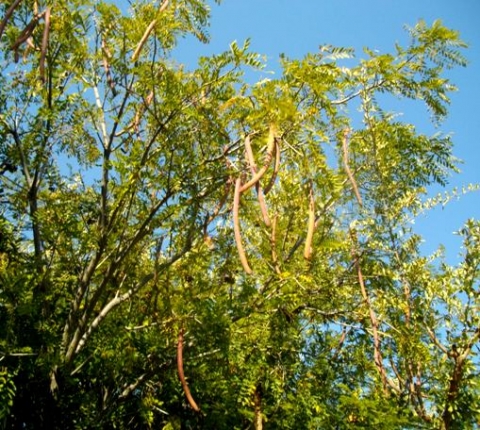 Cassia abbreviata, the long-tail cassia or in Afrikaans sambokpeul (horsewhip pod), is a medium height tree reaching heights from 3 m to 10 m (SA Tree List No. 212). It is characterised by a rounded crown, yellow flower sprays and long pods hanging down.

The species distribution in South Africa is in the far northeast, only in Mpumalanga and Limpopo. It is far more widespread beyond the border in tropical Africa.

The habitat is woodland, wooded grassland and bushveld, along rivers and near termite mounds. The species is not considered to be threatened in its habitat early in the twenty first century.

Two of the three recognised subspecies occur south of the Zambezi. They differ only in the nature of hairiness: subsp. abbreviata has loose curly hairs on the underside of leaflets. Subsp. beareana has fine straight hairs pressed to the leaf.

The tree features in various traditional medicine remedies. Subsp. beareana bears the name of a medical doctor, O’Sullivan Beare, who successfully copied tribal use of the tree’s roots in treating blackwater fever.

The tree with its  and much noted pods is good for gardens with little or no frost (Coates Palgrave, 2002; Schmidt, et al, 2002; http://redlist.sanbi.org).