Home » TYPES » Trees » Canthium suberosum
Back to Category Overview
Total images in all categories: 12,081
Total number of hits on all images: 7,378,999 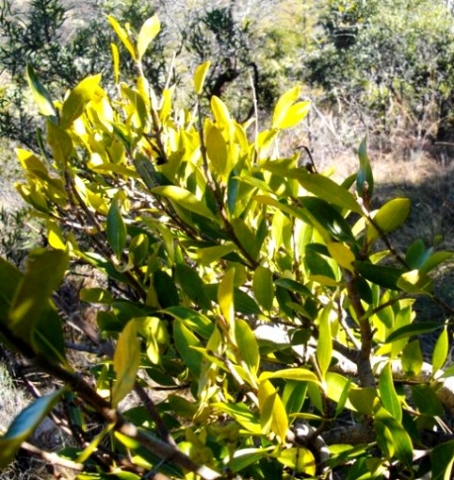 Canthium suberosum, the corky turkey-berry or in Afrikaans kurkbokdrol (cork goat turd), is a shrub or small tree with rounded crown reaching heights from 3 m to 8 m (SA Tree List No. 709.1).

It has grey-brown bark in various paler and darker shades and pinkish brown, powdery young twigs. Low down a thick, folded, corky appearance is found on old stem parts.

The leaves are opposite at prominent nodes and held erectly; the leaf shape is elliptic to obovate with tapering base and tip. Leaf texture is leathery, shiny and sometimes hairy with blue-green upper and dull lower surface colouring. The midrib and four or five pairs of incurving lateral veins are visible. The yellow leaves as seen in the photo are deciduous in at least some parts of the distribution of the species, which lies from KwaZulu-Natal to North West and Limpopo. This plant was seen on the Magaliesberg.

The spring flowers are small, creamy green, growing on short stalks in small clusters from leaf axils. The fruit is ovoid to spherical with a circular marking around the tip. The fruit starts off shiny green, turning black and wrinkled when ripe.

The species distribution has two discrete or unconnected parts, one along the Eastern Cape and KwaZulu-Natal coast and the other to the west, north of the Vaal River in Gauteng, Limpopo and North West.

The tree grows on rocky slopes, kloofs, forest margins and in mixed, montane woodland. The species is not considered to be threatened in its habitat early in the twenty first century (Coates Palgrave, 2002; Schmidt, et al, 2002; http://redlist.sanbi.org).