Home » TYPES » Trees » Afrocanthium mundianum
Back to Category Overview
Total images in all categories: 11,442
Total number of hits on all images: 6,209,742 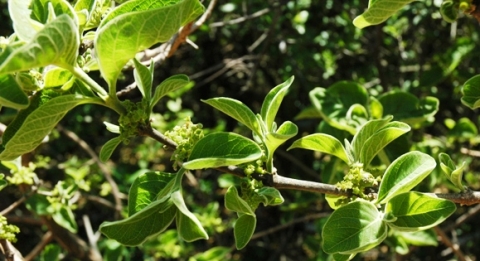 Afrocanthium mundianum, previously known as Canthium mundianum is commonly known as the rock-alder or klipels in Afrikaans. It is a shrub or small tree of up to 5 m in height (SA Tree List No. 710). The bark is pale grey, fluted, smooth and powdery.

The flowers are small and greenish to yellow. They may either be bisexual or unisexual, both kinds of flowers occurring on the same plant. The fruit is an ovoid, asymmetric drupe, black when ripe.

The distribution is the South African south and east coasts as well as Gauteng, Mpumalanga and Limpopo. The tree is also found in the east of Zimbabwe and in Mozambique. The photo was taken on the Melville Koppies in Johannesburg.

The habitat is forests, their margins, thickets, riverine bush, rocky ridges and montane grassland, often near termite mounds. The trees and shrubs are seen from sea level to elevations around 1800 m. The species is not considered to be threatened in its habitat early in the twenty first century  (Coates Palgrave, 2002; Schmidt, et al, 2002; Van Wyk and Van Wyk, 1997; http://redlist.sanbi.org).