Home » TYPES » Trees » Canthium inerme bark
Back to Category Overview
Total images in all categories: 11,921
Total number of hits on all images: 7,168,600 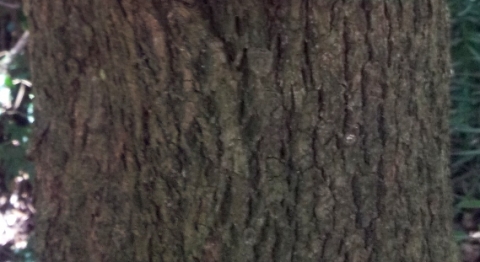 Canthium inerme, the common turkey-berry or in Afrikaans gewone bokdrol (common antelope or goat turd), is a shrub or tree usually reaching heights around 4 m to 7 m, occasionally 14 m (SA Tree List No. 708).

The bark is grey to brown and varies from smooth to rough on old wood. The mature tree in picture, growing in Kirstenbosch, has bark on its trunk showing thick, dark, scab-like sections from irregular, but mainly longitudinal fissuring. Branching occurs usually at nearly right angles in this species. Occasional pairs of robust spines are found above the nodes on young branchlets, especially on sucker shoots.

The species distribution occurs along a coastal strip from the Kogelberg eastwards through the Eastern Cape and KwaZulu-Natal. From Swaziland northwards the trees are found inland in montane forests and woodland. It also grows on rocky outcrops in grassland, across the eastern parts of Mpumalanga, Limpopo, Zimbabwe and further.

The habitat is coastal and montane forest, woodland, streambanks and high elevation, rocky grassland. The species is not considered to be threatened in its habitat early in the twenty first century.

The wood is hard and heavy with a marbled grain, but often available in small pieces only (Coates Palgrave, 2002; Van Wyk and Van Wyk, 2002; iSpot; http://redlist.sanbi.org).