Home » TYPES » Trees » Afrocanthium gilfillanii
Back to Category Overview
Total images in all categories: 11,538
Total number of hits on all images: 6,617,947 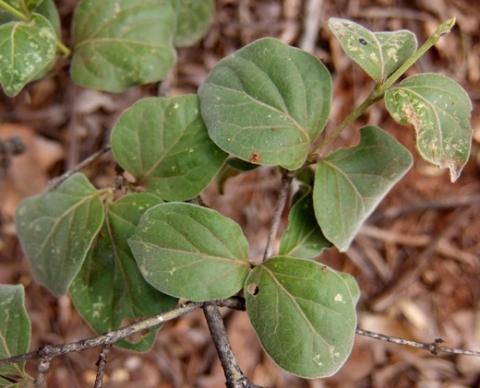 Afrocanthium gilfillanii, commonly the velvet rock-alder and previously Canthium gilfillanii, is a shrub or small tree growing from 2 m to 4,5 m in height (SA Tree List No. 706). The bark is pale grey and smooth, the young twigs covered in white hairs.

The opposite leaves grow on short petioles of about 2 mm, having triangular stipules at their stalk bases. Leaf shape is almost round to broadly ovate or elliptic; the leaf tip tapers broadly, the base is square or rounded. Leaf texture is soft and velvety from fine hairy coverings on both surfaces. Three or four pairs of lateral veins ascend to the margins from the midrib, the net-veining is obscure.

The species distribution is in all four provinces north of the Vaal River, common in Gauteng and also in KwaZulu-Natal, as well as in some neighbouring countries.

The habitat is woodland, bushveld and grassland rocky ridges and thickets, as well as near rivers and seasonal or occasional watercourses. The species is not considered to be threatened in its habitat early in the twenty first century (Coates Palgrave, 2002; Van Wyk and Van Wyk, 1997; http://redlist.sanbi.org).