Home » TYPES » Trees » Calpurnia sericea
Back to Category Overview
Total images in all categories: 11,905
Total number of hits on all images: 7,155,924 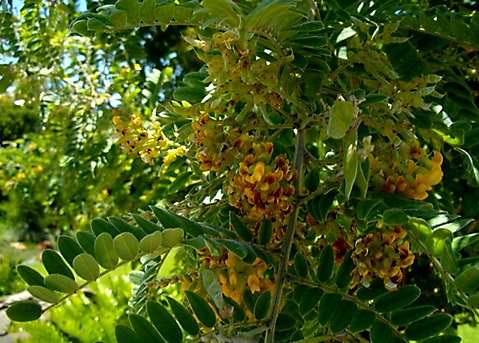 Calpurnia sericea, the mountain wild laburnum, is a much-branched shrub reaching 2,5 m in height (SA Tree List No. 219.4). The specific name, sericea, is a Latin word meaning silky, referring to the silky hairs found on various plant parts, particularly young stems, calyces and to a lesser extent, the leaves.

The species distribution is in the east of the country, in the Eastern Cape, KwaZulu-Natal, Mpumalanga and the Free State; also in at least Lesotho and Swaziland.

The habitat is grassland among rocks, near streams and along drainage lines, mostly at higher altitudes. The species is not considered to be threatened in its habitat early in the twenty first century (Coates Palgrave, 2002; Schmidt, et al, 2002; Pooley, 1998; iNaturalist; http://redlist.sanbi.org).