Home » TYPES » Trees » Calodendrum capense flowers
Back to Category Overview
Total images in all categories: 12,061
Total number of hits on all images: 7,359,864 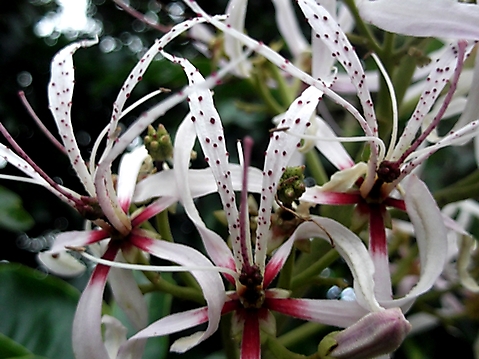 The erect, dark-spotted blades conspicuous in the Calodendrum capense flowers are not the petals! The petals are the five spreading blades below that curve down from the flower base past the calyx, red-purple at the base and white to pale or deep pink in their upper parts; narrow and bearing no spots.

Each flower produces five staminodes with dark purple glands scattered on their curving, petal-like blades. A staminode is a sterile stamen that often only lacks a pollen-bearing anther.

In the interesting, monotypic Calodendrum tree the five stamens are very different from the staminodes: The stamens have cylindrical, whitish filaments curving out, ending in small, dark, oblong anthers; immersed glands are present at the anther tips.

The staminodes in turn have flat, narrow blades similar to the petals but for their surface glands. The staminodes alternate with the petals in the flower. In picture some of the five staminodes of each flower have already disappeared; several Calodendrum floral parts occur in fives.

The female part of the bisexual flower is also unusual: The tubercular ovary is stalked (stipitate), visible in picture on its short stalk above the flower centre. The long, pale purple style protrudes from the top of the ovary, ending in a small, head-like stigma. The ovoid ovary is five-lobed, the rounded, purplish lobes representing five locules, each bearing two ovules.

A couple of green fruit beginnings in the form of enlarged ovaries can be detected in picture among the flowers of the cluster. Their floral parts have already dropped off and they have adopted the young fruit colour (Leistner, (Ed.), 2000; Coates Palgrave, 2002; Pooley, 1993).