Home » TYPES » Trees » Cadaba aphylla old flowers
Back to Category Overview
Total images in all categories: 11,549
Total number of hits on all images: 6,634,764 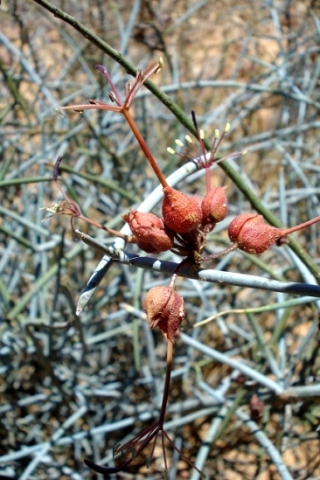 These partly desiccated flowers of Cadaba aphylla show the vital floral parts better than the brightly coloured, flourishing flowers may sometimes do. The stamens and style are joined in one erect column for more than two thirds of the way up, where the five to eight filaments abruptly spread widely in a regular formation.

Some stamens still carry cream coloured anthers, while others have become brown or have dropped off. Whether any of them still carries viable pollen is doubted. No competent pollinator would expect nectar in such withered offerings. But then, pollinators are not known for being calculating rather than instinctual. They are fooled by floral mimicry, a weakness that benefits some flowers without nectar. Free landing rights make insects less picky, while a little scouting around the vegetation usually yields them a dish of sorts.

The purplish style and stigma are still standing amidst the stamens. The brownish sepals clutching the ovary at the flower base are rough-surfaced. They look like petals, but this plant does not only lack leaves, it also has no petals. The peduncles of the flowers appear to have a faint hairy covering, purplish in the photo (Manning, 2009; Coates Palgrave, 2002).