Home » TYPES » Trees » Cadaba aphylla flowers
Back to Category Overview
Total images in all categories: 12,087
Total number of hits on all images: 7,392,880 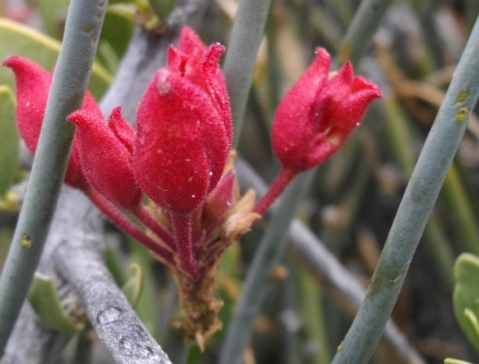 Cadaba aphylla is called desert broom, firstly because it lives well in extreme or semi-desert climate conditions of drought, frost or heat and secondly because the absence of leaves brings a resemblance to another plant, Cytisus scoparius, broom or common broom. This leafless plant of the hot and dry, southern European region bears masses of yellow flowers; a serious invader in North America, Australia, New Zealand and maybe elsewhere.

The Afrikaans names of swartstorm (black storm) and bobbejaanarm (baboon arm) for C. aphylla are interesting, giving leeway to speculation as to their origins. Maybe the dark appearance of the stems and the shape of old branches have something in common with baboon arms. The plant is also sometimes called the leafless wormbush.

The botanical name is also of interest as it is tautological: both cadaba (Greek) and aphylla (Greek and Latin origins) mean leafless.

C. aphylla can be grown from seed and is a good choice for gardens where temperature extremes, no shade and little water provide challenges. More gardeners (and nurseries) might take note of the merits of this option (www.plantzafrica.com).