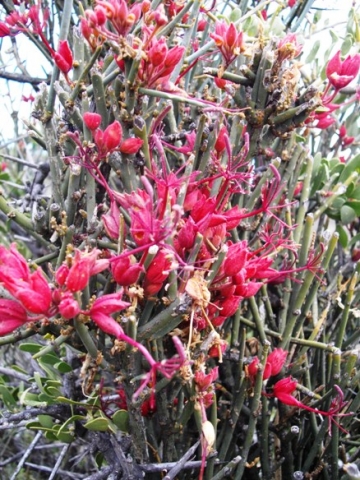 Cadaba aphylla, commonly known as the leafless wormbush, is a very hardy shrub or small tree of 2 m to 3 m in height (SA Tree List No. 129).

It has no leaves apart from on very young seedlings or on the occasional young branch, unlikely to lose much moisture in drought conditions. A multitude of branched, green stems perform the photosynthetic duties. Old stems tend to develop brown bark, whilst the broom-like density of younger stems is blue-green, sometimes with a purplish bloom.

Clusters of flowers appear in spring and summer, usually with red petals and stamens, but the flowers may also be yellow. Round, brown fruit with sticky hairs split open and release small black seeds embedded in a sticky pulp that dries off gradually.

The distribution of C. aphylla is widespread in the southern and western parts of South Africa, including the Kalahari, the Karoo, southern and Eastern Cape and North West.

The plant will survive and often thrive on mountain slopes and hills, dry ravines, flat land and by streams. It is not considered to be threatened in its habitat early in the twenty first century.

Medicinal uses include powdered use of dry parts in poultices, turned into a tonic drink or a purgative in small quantities, although care should be taken as plant toxicity is not fully resolved (Coates Palgrave, 2002; www.plantzafrica.com; http://redlist.sanbi.org).