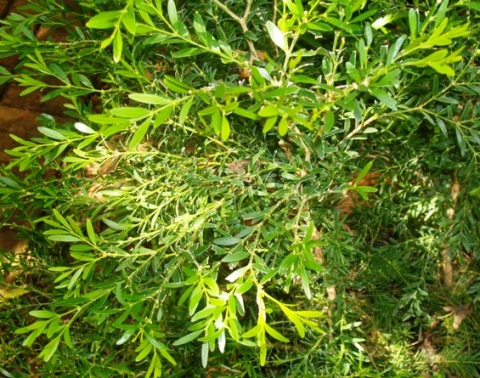 Buxus macowanii, the Cape box, small-leaved box or in Afrikaans buig-my-nie (bend-me-not), is a shrub or small tree reaching heights from 4 m to 10 m (SA Tree List No. 358). The leaves are small, narrowly ovate or obovate and opposite.

The flowers are small, green and unisexual, but growing on the same tree (monoecious).  The male flowers grow in axillary clusters or cymes, the female ones are solitary or found among the male ones. Flowering happens in winter and spring.

The species distribution of this South African endemic is near the sea in the Eastern Cape and KwaZulu-Natal, inland in Sekhukhuneland in Mpumalanga and Limpopo. This photo was taken in the Botanical Garden of the North-West University at Potchefstroom.

The habitat is rocky valleys, forests and coastal dunes in sandy soils. The bushes may occur in pure stands. The species is not considered to be threatened in its habitat early in the twenty first century.

The hard wood is used for carving. The tree resembles the European box tree of the same genus, B. sempervirens (Coates Palgrave, 2002; Schmidt, et al, 2002; http://redlist.sanbi.org).