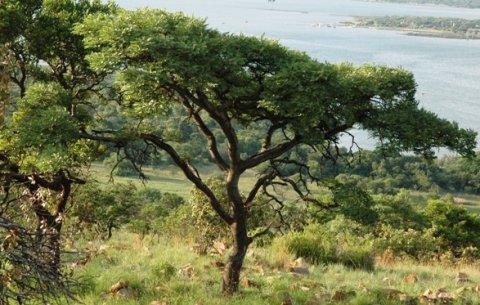 Burkea africana, commonly the wild seringa, is a flat-crowned, deciduous, medium sized tree of 10 m to 15 m in height (SA Tree List No. 197). The species is monotypic, there being only the one in the genus.

The bark is grey, rough and flaking. The stubby branch-tips are densely covered in velvety, rusty red hairs.

The species distribution in South Africa is in the provinces north of the Vaal River and northwards in tropical Africa. The trees are found as far north as Sudan, Côte d’Ivoire and Burkina Faso. The photo was taken near Oberon, Hartbeespoort.

The habitat is deciduous bushveld and woodland at various altitudes. The trees grow in deep sandy soils.

There is a moth, the pallid emperor moth or Cirina forda that lays its eggs on this tree where its larvae later feed on the leaves. Some indigenous people inspect the trees in season for these large caterpillars that feed on the leaves. These in turn are then relished as a seasonal food by humans. Interesting but precarious, as the bark of this tree is so toxic that it serves to paralyse fish! The moth, also called the shea defoliator, occurs from West Africa to South Africa.

Several other insects also feed on this tree, yet it is not considered to be threatened in its habitat early in the twenty first century.

These trees are difficult to grow from seed, while their appearance make them attractive to the nursery trade. The wood is attractive and durable. The bark and pods are used in tanning, also featuring in several traditional medicines. The roots are used in making red dye (Coates Palgrave, 2002; Schmidt, et al, 2002; Wikipedia; www.redlist.sanbi.org).