Home » TYPES » Trees » Burchellia bubalina flower cluster
Back to Category Overview
Total images in all categories: 12,091
Total number of hits on all images: 7,393,207 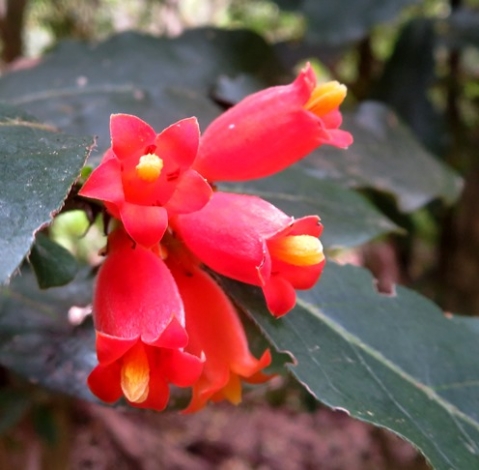 Bulging red corolla tubes ending in five-pointed stars formed by short, angular lobe-tips! This is the spectacular stem-tip inflorescence of Burchellia bubalina. These flowers abound in spring and early summer. They may also appear at other times during the year in mild parts of the tree’s large natural distribution.

The softly hairy flower tubes become 2,5 cm long, the calyces short at the back. Nectar, plentiful during the extended flowering as well as the fruit of the wild pomegranate serve as bird food in the forest (Coates Palgrave, 2002; Van Wyk and Van Wyk, 1997; Pooley 1993).