Home » TYPES » Trees » Burchellia bubalina
Back to Category Overview
Total images in all categories: 11,912
Total number of hits on all images: 7,163,162 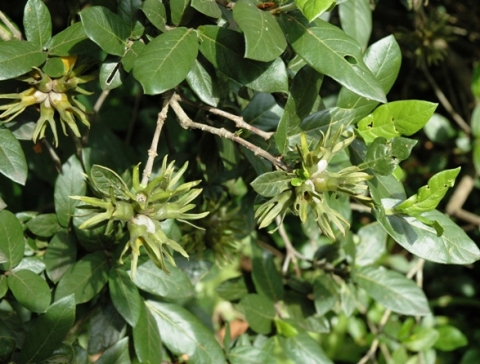 Burchellia bubalina, the wild pomegranate or buffelshoring in Afrikaans, is a shrub or small tree (SA Tree List No. 688). It occasionally reaches heights of 10 m. The genus Burchellia is monotypic (consists of one species only) and belongs in the Rubiaceae (coffee) family.

The distribution area encompasses the south and east coasts of South Africa and the Lowveld of Mpumalanga and Limpopo. The photo was taken near Port Edward.

This tree grows in evergreen lowland, hillside forest and forest margins, on rocky outcrops and in grassland tree clumps. The species is not considered to be threatened in its habitat early in the twenty first century.

The wood is sometimes made into implements of rural community living, also for hut building. The roots have been used in traditional medicine to prepare an infusion taken as an emetic.

The Afrikaans name of buffelshoring (buffalo horn) is derived from the pointed appearance of the old calyx lobes from which the corollas have dropped off, as can be seen in this picture. The wild pomegranate name comes from the resemblance to the real pomegranate tree. The leaves and the orange flowers that attract nectar-consuming birds create this impression (Coates Palgrave, 2002; www.plantzafrica.com; http://redlist.sanbi.org).