Home » TYPES » Trees » Breonadia salicina, mingerhout
Back to Category Overview
Total images in all categories: 11,912
Total number of hits on all images: 7,163,127 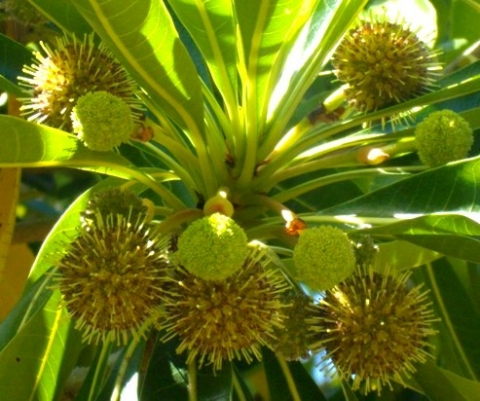 Breonadia salicina, commonly known as the matumi and in Afrikaans as mingerhout, is a tree growing to a wide range of sizes, from 3 m to 40 m in height (SA Tree List No. 684).

The genus is monotypic, i.e. it comprises the one species only. In the photo some stem-tip leaf-bases cluster densely among the flowerheads of which some have open flowers.

The leaves growing in whorls of three to five have fleshy, creamy green petioles that become up to 2 cm long. There are dark stipules between the petiole bases. The margins of the narrowly elliptic to lance-shaped leaves are entire, as are the pale lateral veins ascending from the sturdily ridged leaf midribs. The leaves vary in length between 8 cm and 30 cm.

The flowers grow from leaf axils in spherical heads on long, slender peduncles, each with a pair of small bracts halfway up its length. The calyces are short. Flowerheads become 1,5 cm to 2,5 cm in diameter. The tiny individual flowers, densely together in the flowerheads, are sweetly scented. Each floret has a pale mauve corolla, tubular and five-lobed, widening at the mouth in a funnel-shape. The stamens protrude; the ovary is two-chambered.

The fruits are small, brown, two-lobed capsules that become about 2 mm long. They are densely clustered in spherical heads as the flowers had been before.

The species distribution is in Limpopo and Mpumalanga, slightly into northern KwaZulu-Natal. The habitat is low altitude, riverine, Lowveld forests. The species is not considered to be threatened in its habitat early in the twenty first century (Coates Palgrave, 2002; Schmidt, et al, 2002; http://redlist.sanbi.org).