Home » TYPES » Trees » Brachylaena elliptica
Back to Category Overview
Total images in all categories: 9,746
Total number of hits on all images: 4,375,613 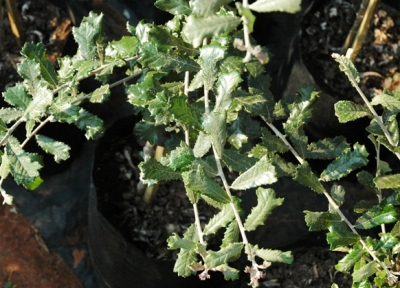 Bitter-leaf, as Brachylaena elliptica is commonly known, is a small tree that grows to 4 m in height (SA Tree List No. 725). Single or multi-stemmed, the bark is pale brown, grooved longitudinally.

The alternate leaves are variable in shape, lobed generally or only at the tips. The dark green, glossy leaves are smooth or slightly hairy above, felted below.

The tree is dioecious (male and female flowers occurring on separate trees), producing terminal and axillary clusters of creamy white flowers in autumn.

The species distribution is along the Eastern Cape and KwaZulu-Natal coastal region. The tree is typically found among coastal bush, on forest margins, rocky outcrops, grassland and thornveld. The species is not considered to be threatened in its habitat early in the twenty first century.

Twigs from this tree have been used in the past by certain indigenous populations for lighting fires through stick friction.

Six of the 11 Brachylaena species occur in Africa, the others on Madagascar (Pooley, 1993; http://www.jstor.org; www.redlist.sanbi.org).