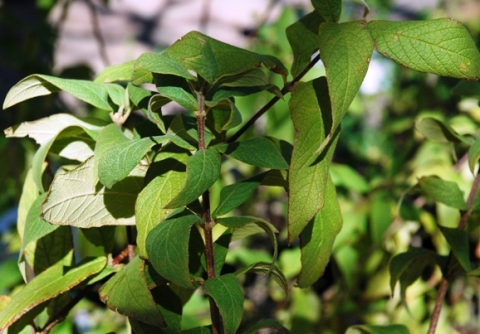 Bowkeria cymosa, the escarpment shell-flower or Transvaal shell-flower, is a leafy shrub or small tree of up to 4 m in height (SA Tree List No. 672).

It produces conspicuous white flowers in axillary sprays during summer and autumn. The flowers have red or sometimes yellow streaks in the throat inside the corolla.

The fruit is a narrowly elliptic capsule tipped with what remains of the spent style of the flower. It splits when ripe and the valves open to release many tiny seeds.

The species distribution is along the escarpment in eastern Limpopo and Mpumalanga, also in Swaziland.

The habitat is bushveld and montane grassland, often along the margins of evergreen forests. The species is not considered to be threatened in its habitat early in the twenty first century (Coates Palgrave, 2002; Van Wyk and Van Wyk, 1997; http://redlist.sanbi.org).