Home » TYPES » Trees » Boscia albitrunca
Back to Category Overview
Total images in all categories: 11,901
Total number of hits on all images: 7,142,257 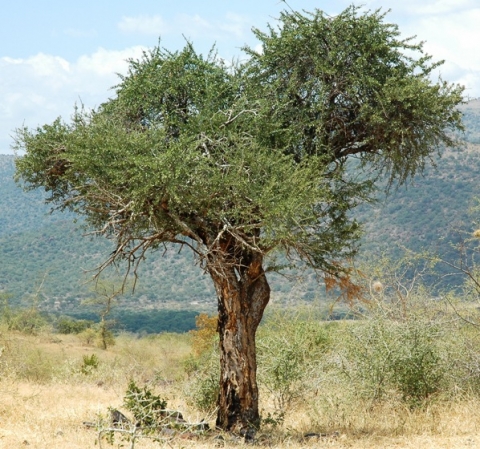 Boscia albitrunca, the shepherd’s tree or witgat in Afrikaans, is a small, mostly evergreen tree, occasionally a shrub, reaching heights from 3 m to 7 m (SA Tree List No. 122). The dense, somewhat spreading crown is often irregularly shaped, over a substantial stem that may appear large for its crown in a compact, thickset habit.

The tree grows in many of the arid parts of southern African countries where resources are scarce. Also widespread in South Africa, it is found in all provinces apart from the two southerly ones, the Western Cape and Eastern Cape.

The habitat is diverse, mostly hot, dry terrain, open woodland and bushveld. The tree is often seen near or growing with or on a termite mound. The species is not considered to be threatened in its habitat early in the twenty first century.

In its domain the shepherd's tree has earned high status for its many uses among local people, sometimes calling it the tree of life. The roots are pounded into fine pieces to make porridge, beer or a coffee substitute. The yellow or pink edible berries are used in traditional dishes.

There are also various medicinal uses for this tree. It is much grazed by livestock and game. Botswana Bushmen used to extract captured rainwater from the hollow trunks of old trees (Coates Palgrave, 2002; Van Wyk and Gericke, 2000; http://redlist.sanbi.org).