Home » TYPES » Trees » Berchemia discolor
Back to Category Overview
Total images in all categories: 11,506
Total number of hits on all images: 6,514,455 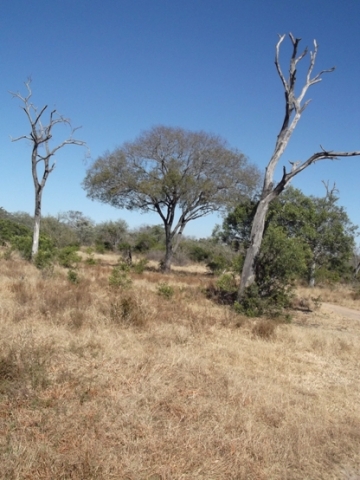 Berchemia discolor, the brown ivory, is a large shrub or medium-sized tree, at its best growing a well-rounded crown over a straight single trunk to heights from 7 m to 20 m (SA Tree List No 449).

The bark is dark grey, roughly fissured on mature trunks, young branches smooth and green, covered in brown lenticels. The leaves are elliptic to oblong, up to 11 cm long, typically 7 cm.

Flowers growing in loose axillary clusters are small and greenish yellow in colour, appearing in spring and summer. The fruit is an ovoid drupe, yellow to pale orange in colour with a single stone. It is popular as edible veld fruit, also for brewing beer and cooking a porridge.

This magnificent specimen is growing in the Djuma Game Reserve in the Lowveld. The tree is sometimes deciduous, here found freshly sprouting in winter.

The species distribution is only in Mpumalanga and Limpopo apart from widespread in the African tropics.

The habitat is lowlying bushveld, often on riverbanks and termite mounds. The species is not considered to be threatened in its habitat early in the twenty first century (Coates Palgrave, 2002; Schmidt, et al, 2002; Van Wyk and Van Wyk, 1997; http://redlist.sanbi.org).