Home » GENERA B-C » Bauhinia » Bauhinia galpinii
Back to Category Overview
Total images in all categories: 9,428
Total number of hits on all images: 4,236,284 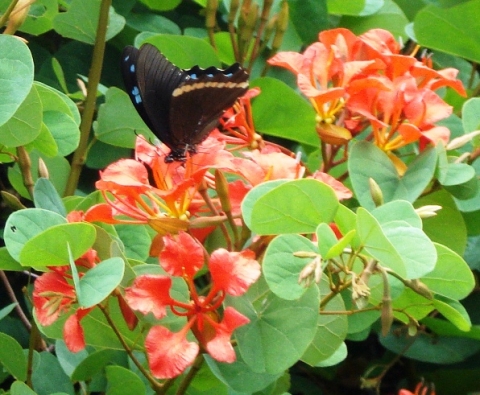 Bauhinia galpinii, commonly known as the pride-of-de-Kaap or in Afrikaans as vlam-van-die-vlakte (flame of the plain), is a shrub, sometimes a climber, occasionally a small, spreading tree reaching heights up to 5 m (SA tree List No. 208.2).

The common name referring to De Kaap may confuse some as to the whereabouts of this plant in nature: the De Kaap valley is near Nelspruit in Mpumalanga, nothing to do with the Western Cape.

The flowers of Bauhinia galpinii have done much to promote the plant among gardeners and pollinators, as illustrated by the one in action here.

The species distribution is in the north-eastern parts of South Africa, the provinces north of the Vaal River and KwaZulu-Natal. Over the border it also grows in Swaziland, Mozambique, Zimbabwe and further afield in tropical Africa.

The habitat includes various kinds of woodland, thicket, scrub, bushveld and along watercourses, often where there is high rainfall. The species is not considered to be threatened in its habitat early in the twenty first century.

Decoctions of roots or seeds of this plant feature in traditional medicine. Trial and error with long historical admixtures of guessing, insight, luck, communication and memory form an important part of the non-laboratory forerunners of chemistry and pharmaceutical science.

Successful trials, those that did not kill their subjects, allow other ingredients in the social mix of discovery, components of recklessness, determination, panic, bravery and even cruelty to pass from human memory.

There are probably too few monuments on earth in honour of ancient (and who knows how recent) medical guineapigs, the unknown animal and human heroes or sacrifices of the profession (Manning, 2009; Coates Palgrave, 2002; Van Wyk and Gericke, 2000; Pooley, 1993; www.plantzafrica.com; http://redlist.sanbi.org).