Home » GENERA B-C » Bauhinia » Bauhinia bowkeri
Back to Category Overview
Total images in all categories: 9,416
Total number of hits on all images: 4,231,499 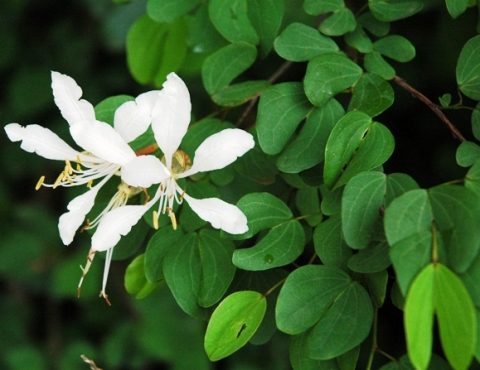 Bauhinia bowkeri, the Keibeesklou (Kei River cattle claw) in Afrikaans, is scrambling shrub or small, straggly tree reaching 6 m in height (SA Tree List No. 208.4). The woody branches arch gracefully in the dense growth. They have grey-brown or pale brown bark with raised, white lenticels on the young stems.

The leaves are fairly small on long stalks and two-lobed, divided more than halfway along the central axis, creating two tips for the rounded shapes. A couple of conspicuous whitish veins arch across each leaf lobe. This leaf shape, characteristic of the Bauhinia genus, is sometimes compared to the shape of a butterfly.

The species distribution is along the Eastern Cape and KwaZulu-Natal coasts from the Kei River to the Umzimvubu River. The habitat is coastal and riverine scrub, as well as some mountain slopes. The species is considered to be near threatened in its habitat early in the twenty first century, due to subsistence farming (Coates Palgrave, 2002; Pooley, 1993; www.plantzafrica.com; http://redlist.sanbi.org).