Home » TYPES » Trees » Adansonia digitata
Back to Category Overview
Total images in all categories: 11,442
Total number of hits on all images: 6,209,651 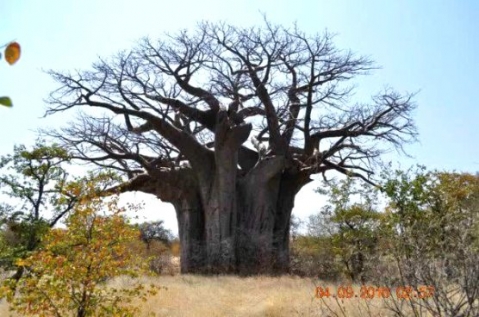 Adansonia digitata, commonly known as a baobab and in Afrikaans as a kremetartboom, is a massive tree, an iconic presence in the central African landscape. It reaches heights around 25 m and a trunk diameter of 15 m (SA Tree List No. 467).

Dominant wherever it has reached a mature stage, the big baobab has intrigued the minds of people living nearby and further away for countless generations. Any living thing of this sheer size will play on the receptive mind, can be understood to stir strong feelings in people, can shape convictions about what is important in the world.

Baobab legends and myths abound. It is just possible that some baobab magic may still work intermittently in the world where electronic devices suck the human spirit into digital reality alien to nature.

The bark shows a variety of colours ranging from pale pink, red-brown and coppery to grey. The bark texture is mostly smooth with irregular folds and undulations.

The leaves on a mature tree, such as are not present on the one in picture during winter, are digitate comprising five to nine leaflets. Saplings have simple leaves, while the leaves on young trees of (say) seventeen years are trifoliolate. This has given rise to a myth among rural people that baobabs appear on the land suddenly, miraculously as mature trees; the younger versions around not recognised for what they are.

A small part of the baobab's African distribution lies in the far north of South Africa, only in the one province, Limpopo. It is far more widespread in tropical Africa.

The habitat is hot, dry woodland or bushveld at lower altitudes. The species is not considered to be threatened in its habitat early in the twenty first century.

Trees like this one of the Limpopo Valley are these days threatened by quite rampant coal mining in the region. State control of mining proceedings has been erratic at best.

The slow start to the move from fossil fuels still means interference with the wellbeing of the home of the baobabs, as well as the rich but threatened biodiversity that goes with it. Timing in such matters determines how many such trees will remain unaffected for posterity (Coates Palgrave, 2002; http://redlist.sanbi.org).