Home » TYPES » Trees » Balanites maughamii
Back to Category Overview
Total images in all categories: 11,506
Total number of hits on all images: 6,514,552 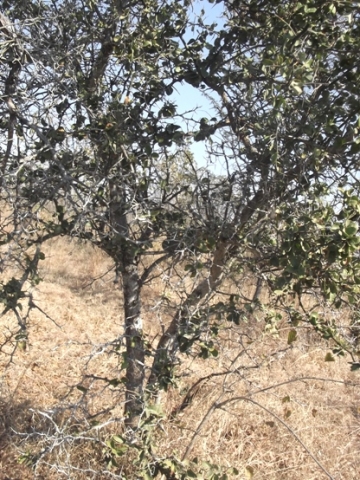 Balanites maughamii is a slow-growing, protected tree in South Africa (SA Tree List No. 251). It grows tall and erect, sometimes to 25 m. The marked fluting or folding and buttressing on the stems of older trees is distinctive.

This young tree branching near the ground is still covered low down in leaves and forked spines similar to those found on Carissa shrubs. Upper branchlets tend to have a zigzag shape; they are green and hairy. The spines are not symmetrical as in Carissa.

The species distribution is in the east of Mpumalanga, Limpopo and the north of KwaZulu-Natal, but more commonly in Mozambique, Zimbabwe and several other tropical Africa countries to Malawi. The one in picture was seen in the Sabi Sands Game Reserve.

The trees occur in dry, open bushveld, woodland and forest, often near water. The species is not considered to be threatened in its habitat early in the twenty first century, although the population is decreasing (Coates Palgrave, 2002; www.plantzafrica.com; http://redlist.sanbi.org).