Home » TYPES » Trees » Azima tetracantha
Back to Category Overview
Total images in all categories: 12,081
Total number of hits on all images: 7,379,233 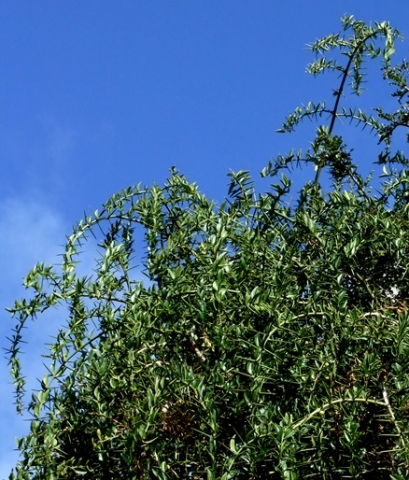 Azima tetracantha, commonly known as needle-bush, is a spiny shrub that may scramble into its neighbours or become a small tree up to 8 m tall (SA Tree List No. 622.1).

Multi-stemmed, the main stem is often short, the bark green or brown and smooth or velvety. The young branches may be square in cross-section, hairy and arching down.

Some parts of A. tetracantha plants are used in treatment of snakebite and also for toothache, presumably not much for snakes.

The species is distributed from Bredasdorp in a coastal swathe through the Eastern Cape and KwaZulu-Natal into the Mpumalanga and Limpopo lowveld. The distribution continues into Africa, in countries including Swaziland, Mozambique, Zimbabwe, Namibia and further in the tropics. It also grows on Madagascar and in India.

The habitat is varied, including bushveld, woodland, floodplains, scrub and thorny thicket, often seen near rivers. The plants may also thrive on termite mounds. The species is not considered to be threatened in its habitat early in the twenty first century (Coates Palgrave, 2002; Schmidt, et al, 2002; Pooley, 1993; http://redlist.sanbi.org).