Home » TYPES » Trees » Apodytes dimidiata
Back to Category Overview
Total images in all categories: 11,506
Total number of hits on all images: 6,488,355 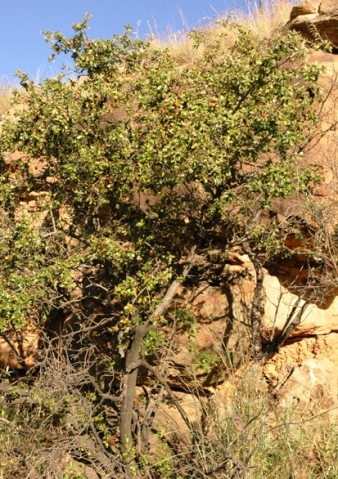 Apodytes dimidiata, the white pear, is often a small tree reaching about 5 m in height (SA Tree List No. 422). In old, tall forests it may follow suit and surprise with sizes up to 20 m. The bark is pale grey, usually smooth and frequently covered in patches of colourful lichen.

The distribution ranges from the south coast of the Western Cape, along the Eastern Cape and KwaZulu-Natal coastal parts to the inland region north of the Vaal River. It is also found in Zimbabwe, Mozambique and tropical central Africa.

The habitat is high rainfall forest margins, tropical forests, evergreen coastal bush, riverbanks and open woodland; often in rocky places. The species is not considered to be threatened in its habitat early in the twenty first century (Coates Palgrave, 2002; Van Wyk and Van Wyk, 1997; Noad and Birnie, 1989; http://redlist.sanbi.org).