Home » TYPES » Trees » Antidesma venosum
Back to Category Overview
Total images in all categories: 12,081
Total number of hits on all images: 7,379,182 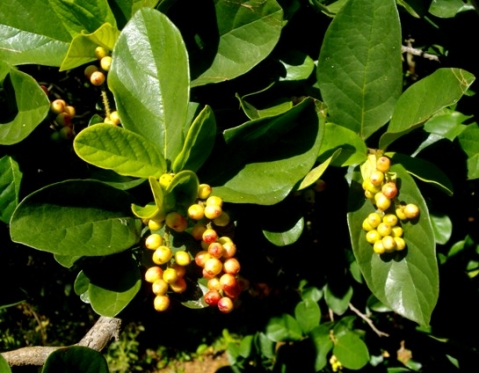 Antidesma venosum, the tassel-berry, is a dioecious, evergreen to semi-deciduous shrub or small tree (SA Tree List No. 318). It grows spreading and arching branches to heights around 5 m. The bark is pale brown or pale grey. Initially smooth, it later becomes rough with flaking and longitudinal fissuring.

The leaves grow alternate to spiralling along the branches. Leaf shape is oblong to elliptic with a rounded or tapering tip and rounded base. Spaced, lateral veins ascend from the pale yellow or brown midrib and curve inwards, just short of the margins. These noticeable veins gave rise to the specific name of venosum.

Leaf texture is leathery; the colouring glossy bright to dark green above while paler, also hairy below. The young growth at stem tips is often yellowish green, the young stems hairy. There are conspicuously large, tapering stipules on the stems by the leaf petioles.

The tassel-berry is found on the east coast and in the northeast of the country, from the Eastern Cape and KwaZulu-Natal to Mpumalanga and Limpopo, as well as widespread in tropical Africa.

It grows at medium to low altitudes in habitats of riverine bush, moist woodland and forest margins, often in sandy soil. The species is not considered to be threatened in its habitat early in the twenty first century (Coates Palgrave, 2002; Van Wyk and Van Wyk, 1997; http://redlist.sanbi.org).