Home » TYPES » Trees » Adansonia digitata stem close-up
Back to Category Overview
Total images in all categories: 11,417
Total number of hits on all images: 6,198,152 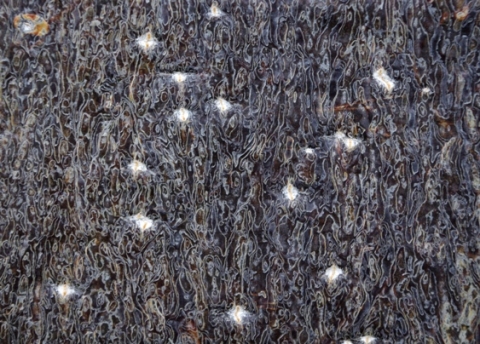 These thin line markings curiously rambling around small, white surface spots were seen on the bark of a baobab tree in the Kruger National Park. They may represent early signs of superficial flaking. The pale, multicoloured, often glossy bark of Adansonia digitata is fairly soft, from 5 cm to 10 cm thick on old trees.

It is unclear whether the white spots are a feature of the tree’s own growth, or inflicted by an insect or some other outside source. They have been noticed on other trees, described as “warts, resembling wax on candles”.

The patch in picture is too small to show the folding or longitudinal ribbing commonly found on baobab stem surfaces.

Stem damage caused by local people who remove pieces of the bark for making mats, ropes, fishing nets and lines, sacks and even clothing, usually has very little effect on the tree. The baobab does not die from ring-barking, simply re-grows new bark when elephants or people help themselves to its covering (Schmidt, et al, 2002; Coates Palgrave, 2002; www.plantzafrica.com).