Home » TYPES » Trees » Adansonia digitata summer foliage
Back to Category Overview
Total images in all categories: 9,141
Total number of hits on all images: 4,085,187 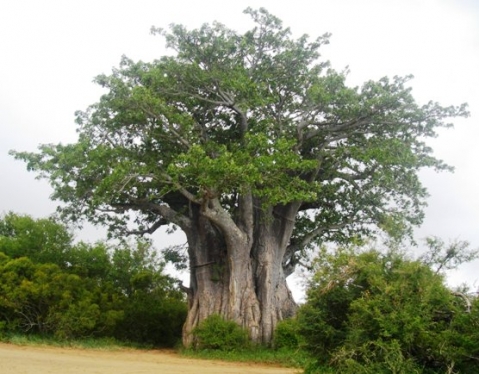 The irregular undulations and fluting of the Adansonia digitata or baobab tree trunk are displayed here. The tree was photographed in the Kruger National Park in January (SA Tree List No. 467). Slight pinkish discoloration of the bark is visible low down where some animals may have allowed themselves a back scratch. Living beings that move do interfere with those that can’t; life is so much simpler if one’s food can’t run away!

This baobab carries an ample green crown as it is midsummer. By January bloom-time for baobabs is usually over though. These trees grow large, waxy white flowers. Five broad petals open to a diameter of 20 cm, topped with numerous stamens.

A close-up look on this tree would probably reveal only some bare ovaries tipped with persistent styles, as the petals drop off after about one day from the time a flower opens. That is if the tree is old enough. The youngest baobabs to flower are already 16 years old, sometimes they wait until 23.

Never pick a flower from a baobab, the local population may warn, as one is bound to be eaten by lion for offending the spirits thus. And babies become strong from being washed in water in which pieces of baobab bark had been soaked; but not for too long, as this will make them obese as they grow up.

Believe this and the road is paved beyond superstition to the wilder realms of fantasy (Coates Palgrave, 2002).