Home » TYPES » Trees » Adansonia digitata flower
Back to Category Overview
Total images in all categories: 11,417
Total number of hits on all images: 6,198,042 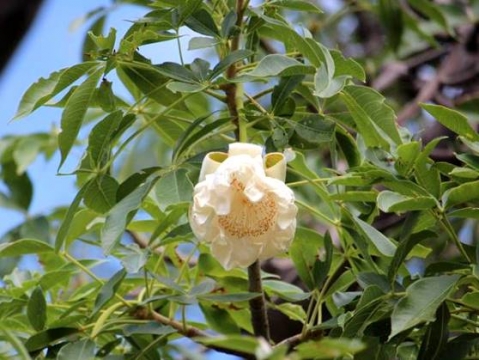 The pendulous flowers of the baobab, Adansonia digitata, grow solitary from leaf axils on long stalks, about 15 cm to 20 cm in diameter. They grow from globular green buds, each covered in its calyx. The flower is bisexual, the floral parts appearing in fives.

The calyx is deeply lobed, the pointed lobes curving back in the open flower. Silky white hairs are found on the inside surfaces of these recurving lobes. The large, crinkly petals are white and waxy, spreading widely when fully open. The spreading is not yet complete in the flower of the photo. During the short period in which the corolla presides over the rest of the flower, the petals scar easily, quick to turn brown from damage.

The large cluster of stamens emerges from one fused column, white and cylindrical in the flower centre. The stamens consist of delicately thin filaments topped by tiny, roughly globular, pale brown anthers. There is a style and a five to ten-chambered ovary. The flower exudes an unpleasant odour.

The opening of a flower bud starts in late afternoon. The process commences with the curling back of sepals and the unfurling of the petals. The flower reaches its prime soon after sunset, exposing the large cluster of stamens in the flower to their pollinators.

During the one night that the flower lasts, pollination happens. It is mainly performed by fruit bats seeking nectar; maybe also by insects and the wind.

By the next morning, when the flower is still open, the petals and sepals straighten over the stamens. Then the wilting flower drops both petals and stamens, the style remaining on the ovary. This means each flower completes its functional cycle within 24 hours.

Blooming begins in mid-spring when the tree buds and sprouts leaves; it lasts to early summer.

It is said that the baobab is the biggest flowering plant on earth (Coates Palgrave, 2002; Schmidt, et al, 2002; www.pinterest.com).