Home » TYPES » Trees » Acokanthera oppositifolia
Back to Category Overview
Total images in all categories: 11,544
Total number of hits on all images: 6,627,554 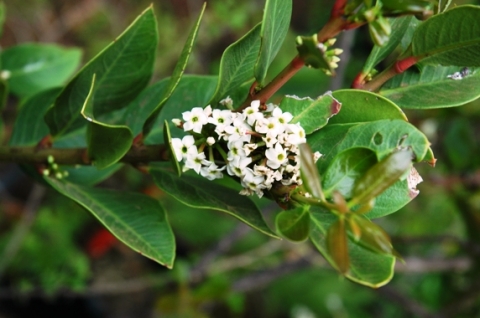 Bushman’s poison or Acokanthera oppositifolia is a shrub of about 2 m to a small tree of 5 m in height (SA Tree List No. 639). It is evergreen or semi-deciduous depending on conditions. All parts of the plant are toxic.

The white latex was used in the past by the San in the poisoning of arrow-heads for hunting game. It is said that plant toxicity is so high that fatalities may occur when meat is roasted over a fire made of the wood. Birds do eat the fruits that are fatally poisonous to humans.

The leaves are opposite as the specific name indicates and oblong-elliptic to obovate in shape. The glossy and leathery blades are dark green above, paler below where they also may have some purple or red. The margins are entire, There is a small spiny point at the leaf-tip.

The flowers grow in axillary clusters, white within and pink on the outside of the corolla tubes. The fruit is ovoid, becoming red and later purple as it ripens.

The species distribution is a coastal strip from the Western Cape through the Eastern Cape to KwaZulu-Natal and widespread north of the Vaal River, as well as in several other African countries. This is the most widespread of the three Acokanthera species in South Africa.

The habitat is varied, forest underbrush and forest margins, coastal bush, rocky outcrops, riverbanks and woodland. The species is not considered to be threatened in its habitat early in the twenty first century (Coates Palgrave, 2002; Van Wyk and Van Wyk, 1997; www.plantzafrica.com; http://redlist.sanbi.org).