Home » TYPES » Trees » Acokanthera oblongifolia
Back to Category Overview
Total images in all categories: 11,544
Total number of hits on all images: 6,627,451 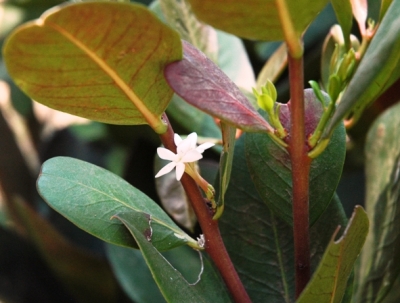 Acokanthera oblongifolia, commonly known as the dune poison-bush, is an evergreen shrub or small tree reaching 3 m to 7 m in height, occasionally taller (SA Tree List No. 638). The main stem is short and straight, the branches erect. The bark is dark grey and rough. Damaged plant parts exude a white latex.

The opposite leaves grow on thick, wrinkled petioles of 4 mm to 10 mm long. The leaf-shape is broadly elliptic, oblong or lanceolate. The leaf base tapers or is rounded, the tip also tapering and blunt, rounded or notched, sometimes recurved and with a hairy protrusion. The margins are entire and rolled under. The blades are thickly leathery, dark green and glossy above, paler with the midrib prominent below. The ascending lateral veins are obscure, sometimes purplish on the lower surface. Leaf dimensions are 6 cm to 10 cm long and 2,5 cm to 6 cm wide.

The sweetly fragrant, white or pink-tinged flowers grow in small clusters from leaf axils on young, upper branches. The flowers have slender corolla tubes up to 2 cm long, longer than those of A. oppositifolia. The five, spreading lobes are up to 7 mm long. Flowering happens from late winter through spring.

The fleshy, ovoid to nearly globose fruit becomes red and purplish black as it ripens. It is than 2 cm long, carrying one or two seeds.

The species distribution is in the Eastern Cape and KwaZulu-Natal, also in Mozambique. The habitat is coastal scrub and dune forest, rarely far from the sea. The species is not considered to be threatened in its habitat early in the twenty first century.

All plant parts are highly toxic. The tree may be planted by gardeners who don't know this or who accept that many garden plants are poisonous, requiring care in protecting (and educating) especially children, rather than necessarily avoiding or banning them (Coates Palgrave, 2002; Van Wyk and Van Wyk, 1997; Pooley, 1993; iNaturalist; http://redlist.sanbi.org).