Home » TYPES » Succulents » Succulent rosette
Back to Category Overview
Total images in all categories: 11,442
Total number of hits on all images: 6,209,905 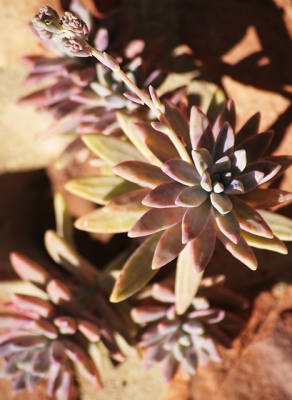 Two succulent families, viz. the Crassulaceae and the Euphorbiaceae have species indigenous to every continent on earth. These families are made up of more than 1000 species (each). The Cactaceae of (mainly) the Americas and the Aizoaceae of southern Africa and elsewhere are still bigger succulent families in terms of the number of plant genera and species that form part of them.

The largest and more widely distributed plant families on earth are usually older than many of the smaller and localised ones, having been around during more of the historic events and stages in the ongoing biological evolution. This remains a major field of study today among botanists and other naturalists. And a source of fascination to many inquisitive minds who can build personal understanding from the currently more available knowledge resources.