Home » TYPES » Succulents » Tulista minima var. poellnitziana
Back to Category Overview
Total images in all categories: 11,905
Total number of hits on all images: 7,155,921 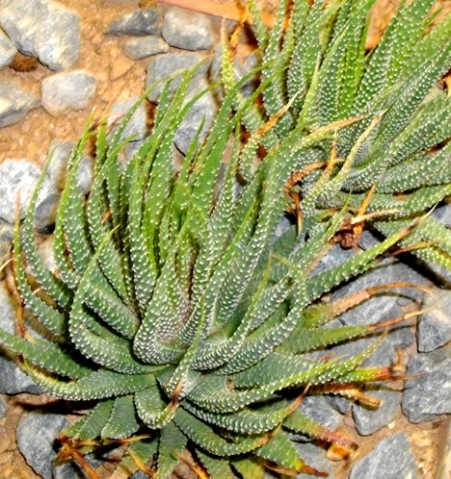 Tulista minima var. poellnitziana is a stemless leaf succulent, a robust form of T. minima. Its rosettes become as big as 15 cm in diameter, but the plant rarely forms clumps.

The leaves are long (up to 18 cm) and slender, lance-shaped and incurving. They are fairly densely covered in scattered, white, tubercular dots, sometimes growing in transversal rows. The outer leaf surfaces are well rounded, the inner ones more or less flat, while the leaf tips are notably thin and elongated. The variety is found in the Western Cape near Robertson, Swellendam and Montagu, to the northwest of the other variety, var. minima.

The habitat is gravelly soil in fynbos or renosterbos. The plant is considered vulnerable in its habitat early in the twenty first century. This is due to farming, coastal development and invasion of the land by alien vegetation (Scott, 1985; Wikipedia; http://haworthia-gasteria.blogspot.co.za; www.redlist.sanbi.org).